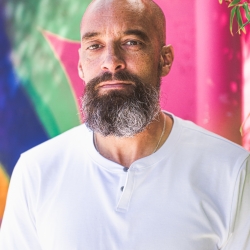 Jeff Duncan-Andrade, Ph.D., is Professor of Latina/o Studies and Race and Resistance Studies at San Francisco State University. He is also a founder of the Roses in Concrete Community School, a community responsive lab school in East Oakland and the Community Responsive Education Group. As a classroom teacher and school leader in East Oakland (CA) for the past 29 years, his pedagogy has been widely studied and acclaimed for producing uncommon levels of social and academic success for students. Duncan-Andrade lectures around the world and has authored numerous journal articles and book chapters on effective practices in schools.  He has written two books and his third book with Harvard Press is due out Spring 2021. In 2015, Duncan-Andrade was tapped to be a Commissioner on the National Commission on Teaching & America’s Future (NCTAF) and in 2016 was part of the great educators invited to the White House on National Teacher Appreciation Day by President Obama. He is also the 2019 Laureate for the prestigious Brock International Prize in Education. Duncan-Andrade is also consistently ranked as one of the nation’s most influential scholars by EdWeek’s Public Influence Rankings.

Duncan-Andrade’s transformational work on the elements of effective teaching in schools is recognized throughout the U.S. and as far abroad as New Zealand.  His research interests and publications span the areas of youth wellness, trauma responsiveness, curriculum change, teacher development and retention, critical pedagogy, and cultural and Ethnic Studies. He works closely with teachers, school site leaders, union leaders and school district officials to help them develop classroom practices and school cultures that foster self-confidence, esteem, and academic success among all students.  Duncan-Andrade holds a Ph.D. in Social and Cultural Studies in Education and a Bachelor of Arts degree in Literature, both from the University of California – Berkeley.